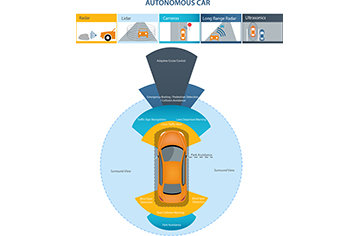 The first death caused by a self-driving car occurred on May 7, 2016, when Joshua Brown’s auto-piloting Tesla plowed into a truck at an intersection in Williston, FL. It was a horrible accident. The vision sensors on the Tesla apparently failed to “see” the truck, which was painted white.

The story was reported online, on cable news, in newspapers – just about everywhere.  Interesting, isn’t it, that when just one self-driving car crashes, it makes front-page news, when millions of crashes involving cars driven by humans garner much less attention? But let’s set that aside for the moment and review what the NMVCCS tells us about what kind of accidents are happening, and why.

The 2015 National Motor Vehicle Crash Causation Survey (NMVCCS) is a fascinating– and rather disturbing – report to read. In it, the National Highway Traffic Safety Administration (NHTSA) reports findings about what caused 2,189,000 vehicular crashes that happened in the U.S. between 2005 and 2007. Even a decade later, the statistics still present the most comprehensive body of data about what causes cars to crash. (To add a few additional statistics, those 2,189,000 accidents involved 4,031,000 vehicles, 3,945,000 drivers and 1,982,000 passengers.)

There are three reasons for accidents, documented separately in the NMVCCS report.

Category One: Driver-Related Reasons for Accidents

Would self-driving cars cause more, or fewer, driver-related accidents, assuming that the “driver” is the car itself? It is hard to predict exactly, but it seems possible that a growing number of self-driving cars, with the ability to “read” traffic lights and road signs and respond appropriately could outperform the drivers studied.

One thing for sure? Self-driving cars would not fall asleep, which could eliminate the 7% of accidents caused by non-performance errors.

NMVCCS documents 44,000 accidents that were attributable to vehicle failures. Of them:

NMVCCS documents 52,000 accidents that were attributable to environmental problems. Of them:

Would self-driving cars cause more, or fewer, environment-related accidents? It is again difficult to predict exactly. Although self-driving cars would be as susceptible to certain environmental factors as human-driven cars are, it is also worth remembering that a growing number of self-driving technologies under development can recognize, adjust, and alert other vehicles of  adverse weather and road conditions.

We are still decades away from amassing statistically significant data on the number of accidents that will be experienced by self-driving vehicles. Nonetheless, a review of the statistics reported in the NMVCCS presents a thought-provoking glimpse at how the safety of self-driving cars might evolve in the years ahead.