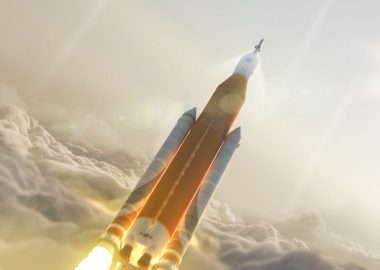 NASA’s Space Launch System (SLS) – an enormous rocket set to launch astronauts into deep space – got a crucial endorsement from the private sector.

The Commercial Spaceflight Confederation (CSF) publicly announced their backing of the project at the 2017 FAA Commercial Space Transportation Conference. CSF is an industry association that represents over 70 businesses and organizations, including key players such as SpaceX and Blue Origin.

The endorsement demonstrates a shift in attitude within the industry, as the private and public sector come together for what otherwise would be fierce competition.

Alan Stern, chairman of the board of directors for the CSF, revealed the enormous value that the SLS project will have on the space industry.

“There are bright futures across the spectrum of commercial space,” said Stern at the FAA conference. “The SLS can be a resource that benefits commercial spaceflight and makes our future even brighter.”

The project is currently in development for its debut launch, slated for fall 2018. The starter rocket will be first of three evolutions, according to NASA.

Don’t miss the upcoming Space 2.0 event, from April 25-27, 2017 in Silicon Valley, where you’ll be able to connect with industry leaders and accelerate business plans.