Crowd Funding for a Workshop, to Design “A City on Mars” - Infocast 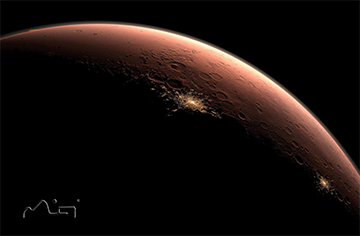 Crowd Funding for a Workshop, to Design “A City on Mars”

Los Angeles, CA – Imagine for a moment what it would take for not just one human to live on Mars, but an entire city of people. Now imagine how humanity even begins down the long journey of making that dream a reality. Designing Mars’ cities will be the first crucial step to creating a sustained human presence on the red planet.

Last week, Mars City Design launched a crowd funding campaign on the Kickstarster platform in hopes of beginning to achieve the ambitious goal of living “off planet.” The raised funds will help with travel and operational costs of getting Mars City Design competition finalists to Los Angeles for a Power Lab workshop this summer.

Mars City Design’s mission is to create visionary blueprints for real cities to be built before humans truly migrate to Mars. Our mission includes:

• Establishing a module base of four people
• Growing it to a size of an entire city with over 1000 inhabitants
• Applying this technological breakthrough for the benefit of Earth. Testing it through 3D printing the prototypes in scale one.

This past year we created a design competition where participants from all over the world were able to have their say on what humans would need, not just to survive on Mars, but to sustain life in a way we are used to on Earth.

In the coming months, we will be hosting a “Mars City Power Lab” summer workshop, at the University of Southern California on September 15th-September 27th, 2016.

At this workshop, our finalists will build working prototypes and confer with industry experts about their projects viability and enhancement.

If we hit our goal of $30,000, the funds will allow our finalists and experts to unite in one place for two weeks. We will focus on developing the selected designs of the cities on Mars, to further our mission of creating the right blueprints for a city on Mars.

To back us or for more information go to the below link. Welcome to Mars City!