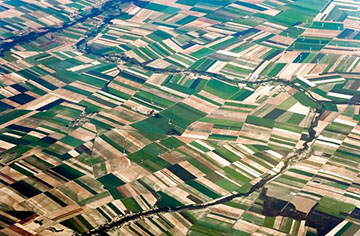 There’s a new way for firms to analyse global economic developments and events, by viewing them from space. While satellite analytics have been available to governments for decades, high-resolution satellite imagery is fast becoming the last Cold War technology to be made widely available for commercial use.

Despite previous obstacles in efficiency, developments in the market have now made launching satellites infinitely more cost-effective. In as little as a decade, the satellite analytics market is now continuing to grow at a jaw-dropping pace. Firms such as DigitalGlobe now own and operate a constellation of earth imaging satellites that collect 3,000,000 km2 of earth-based imagery every day.

Following on from the US government’s recent relaxation on the resolution of satellite imagery, it is now possible to view close to any location on earth at a 30 cm spatial resolution (seen below). The extent to which satellite imagery can now be analysed has infinite ramifications for a range of industries. With the advent of cloud technology, analytics firms are now able to access satellite imagery providers’ online platforms (such as DigitalGlobe’s GBDX), from anywhere on the planet.

Global institutions are also starting to take note. The World Bank now sees satellite analytics as a possible ‘go to’ method for ‘taking the pulse’ of emerging markets. With Sri Lanka being used as a dry run, the World Bank has teamed up with Orbital Insight (a California based start-up) to gauge economic developments in the country by monitoring them from space.

Looking to Wall Street, Spaceknow Inc (another California based start-up), are also revolutionising the analytics market. In a historic first, Spaceknow have created an index with an algorithm that analyses activity at over 6,000 industrial sites across China. Better known as their ‘satellite manufacturing index’ (SMI), it is the first of its kind to be featured on Bloomberg Terminals. Their SMI works similarly to a purchasing managers index, except instead of purchasing managers surveyed, the algorithm analyses 2.2.billion satellite images over a total area of 500,000 km2.

In line with the official manufacturing PMI from China’s National Bureau of Statistics, Spaceknow’s SMI continues to follow the same deflationary trend, though it should be noted that Spaceknow’s figures are far less optimistic than the official data provided by China.

Building on economic transparency seems to be the key in this market. In the words of Spaceknow CEO Pavel Machalek: “What we have is an independent third look at the facilities in China using a completely different methodology.” Machalek also recently announced plans for further indices to track global economic activity from space, with India as his next possible focus. As impressive as all this may be, the satellite analytics market is no doubt still in its infancy. Industry insiders have been heard to speak of entire investment platforms based on the data produced by proprietary algorithms that analyse satellite imagery. As discontent with traditional economic indicators grows, the transparency brought about by satellite analytics might just be what the global economy needs to shift itself away from the current recessionary trend.

Moving beyond economic development and finance, satellite analytics are also proving to be a champion for the renewable energy cause. Locus Energy (based out of Hoboken, New Jersey), have built a forecasting engine related to its ‘Virtual Irradiance’ product. Locus’ proprietary analytics use imagery to enable the forecasting of future solar energy production based on fluctuations of sunlight caused by cloud cover and atmospheric turbidity.