Start-up NewSpace: What Entrepreneurs Should Know, Because (the Real) Mark Watney Needs You - Infocast 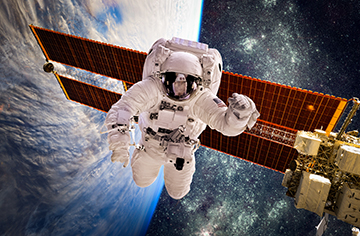 Start-up NewSpace: What Entrepreneurs Should Know, Because (the Real) Mark Watney Needs You

“The Martian” depicts a future most space-enthusiasts would drool over. But in reality, a future where humans make regular trips to other planets will require a lot of help from entrepreneurs, not just NASA. Fortunately, things are moving quickly. According to a recent CB Insights report, as of July, funding for space startups in 2015 has topped investment in the previous three years combined at almost $1.2 billion. Speaking with Chad Anderson, managing director of the Space Angels Network, 2015 has been an exciting year, pointing out how small satellites are hitting the mainstream media, spurred on by Planet Labs’ successes in Earth-observation CubeSats: “There are now more remote sensing start-ups than I can count on both hands.”

“It is as much about education as it is about business. Many of the investors are trying to understand the environment and identify those places and events where they need to be to meet space entrepreneurs and companies,” said Jeff Feige, chairman of the board to the Space Frontier Foundation. “For those entrepreneurs interested in learning more about what investors are looking for, industry events like this are an ideal forum.”

Emergence of Low-Risk Opportunities: It is easy to believe that investments in space companies are too risky, with long timelines and the need for large capital. “And that’s true for some, but space is very broad,” said Anderson. Launch service companies developing new and cheaper rockets generally need significant capital to get off the ground. “But even the cost for those ventures has come down significantly. And if you’re talking about starting a satellite company, the bar for that has become incredibly low over the past few years. You can create your own satellite for tens of thousands of dollars and get them launched in a relatively short time frame.”

Dissolving Divisions: Efforts are underway to bridge the divide between established companies and the start-up disrupters. “The incumbents are really trying to find a way to compete or cooperate with these new start-ups,” said Anderson. “[NewSpace] is no longer something that can be ignored.” The Space Angels Network is working with Boeing to identify promising start-ups to get them the resources they need to develop their technology. Anderson found that, “there’s a general willingness from the big players to work together with start-up companies, and that’s very promising.”

What Investors Look For – A Conversation with the Space Angels Network

A complete and humble management team.

Realistic expectations and an understanding of the key assumptions and market dynamics that underlie the business model.
Something completely new OR a way to do something 10x better, faster, cheaper than anyone else in the market.

Near-term profitability. “[The Space Angels Network] is very interested in big vision, opening up new markets and blazing the trail. But we are also looking for companies that can make money along the way. That is really important,” says Anderson.

A clear plan. Anderson added that entrepreneurs don’t have to have it all figured out, but they do have to have a clear vision of where they’re going: “You have to have a really good idea as to what are the key variables of your business plan, and all the reasons why your team is the right team to be the one to pull off what has never been done before.”

Demonstrated resourcefulness. “We’re always thinking about how much an entrepreneur can accomplish with the money we invest. If you’re able to generate market traction with no funding, that’s a pretty good indicator of potential with investment. To succeed in space, you may also need to disrupt some very established players. You have to know what you are getting into, to fly in the face of adversity and be resourceful,” says Anderson.

The Opportunity of New Markets
Investors are excited about companies opening up brand new markets such as space mining. But Anderson warns that making the business case for market-creating innovations is often more difficult than making the case for a disruptive business model. . “It takes a lot more faith and vision, and an understanding of your place in the ecosystem. Are the thousand or so people who have bought tickets for commercial spaceflight going to be the only ones to do so? Once the vehicles start flying, will there be more customers? No one knows for sure, but therein lies the opportunity.”

Regulatory Woes
Entrepreneurs in the space industry are faced with a heavy regulatory regime, often not developed to accommodate new space ventures. “Doing business in space means at some level you are doing business with the government. The most successful entrepreneurs are the ones that understand the regulatory environment they operate in and join the conversation early to help shape legislation.”
Anderson offers some advice to the entrepreneur: When you are doing something brand new, whether it is asteroid mining or human spaceflight, when you are creating new markets, there likely isn’t a regulatory framework in place and legislation is going to have to evolve for your business model to operate effectively.” Anderson emphasizes the need to understand the field that you are operating in, and what you can do to realistically make money under that oversight.

Entrepreneurs, let’s science the sh** out of this!