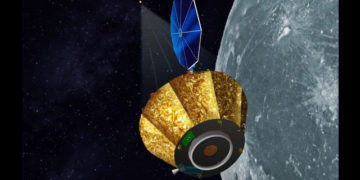 A team of researchers led by Richard Miller of the University of Alabama in Huntsville (UAH) has recently proposed a next-generation mission to the moon called the Lunar Occultation Explorer (LOX) which is now under review by NASA. If accepted by the agency, it will be the first dedicated astrophysics lunar mission.

“We hope that this mission will be transformational for all institutions that are involved, from a science and education perspective,” Miller told Astrowatch.net.

The LOX team includes nuclear astrophysicists, supernovae experts, simulation and modeling experts, planetary scientists and mission operations experts. In December 2016, they proposed NASA a $237-million mission as part of the agency’s Medium-class Explorer (MIDEX) program. Within the next five months NASA will decide if the LOX project should be developed further as it will select three concepts to go into a nine-month study, with a subsequent selection of one mission for flight.

“We have written the large proposal and submitted it to NASA for consideration. The proposal includes details regarding our science, instrumentation, spacecraft, operations concept and of course cost. NASA’s MIDEX program is a competitive one with multiple concept submissions under consideration,” Miller said.

LOX is planned to be launched and placed in lunar orbit around 2023. It would carry the BGO Array for Gamma-ray Energy Logging (BAGEL) instrument – a large array of 45 to 100 gamma-ray sensors to study thermonuclear, or Type IA, supernovae. Each spectrometer is made of a bismuth germanate scintillator crystal used to detect gamma-rays.

“This crystal ‘lights up’ when a gamma-ray interacts within it, and the resulting signal is detected with associated optoelectronics,” Miller told Astrowatch.net.

He added that each spectrometer also has a plastic shield that rejects charged particles.

“Together they work in a configuration called a phoswich. The individual detectors are similar to ones flown previously, have high spaceflight heritage, and are low-risk,” Miller noted.

In order to study supernovae, the LOX spacecraft would rely on the Lunar Occultation Technique (LOT) which is currently under development by Miller and his team. In this technique the moon acts like a large occulting disk. Therefore as a satellite orbits the moon, distant sources such as supernovae are seen to rise and set over the edge of the moon.

These occultations would allow the scientists to reconstruct the location of individual sources, measure their spectra, and monitor changes over timescales ranging from days to months or more. The LOT method would use the temporal modulation generated by the moon blocking the sources, to do what other approaches do in more complex and expensive ways.

Miller’s team has already used LOT to find the first high-energy astrophysical source ever detected from the moon, a galactic X-ray source known as Cygnus X-1 that is thought to include a black hole. That discovery gave the researchers the confidence that they could move forward with this technique and propose a full-scale mission utilizing LOT.

LOX’s primary science goal is to resolve the enigma of Type-IA (thermonuclear) supernovae in three ways:
by probing the fundamental nuclear characteristics of each detected supernova to determine features such as the structure and the explosion mechanism
by performing a census of supernova progenitors and understand their diversity
by facilitating additional understanding of the host galaxy environments and relationships to optical observables.
“We will do this by detecting nuclear gamma-rays, the fundamental radiation produced by these objects,” Miller said.

He concluded that LOX is expected to provide new insights into the nature of supernovae while continuously monitoring the sky.

“In this business the most exciting discovery is often the one you never expected. From a supernovae perspective we will certainly gain new insights into these objects, and perhaps for the first time definitively identify the progenitor systems and their diversity. We will also continuously monitor the sky and perform an all-sky survey in the nuclear gamma-ray regime, which has not been done for almost 20 years,” Miller said.

Tomasz Nowakowski is the Editor-in-Chief at Astrowatch.net.