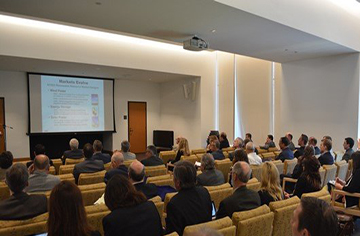 Leaders from a State that is itself leading thought and action in growing the contributions of renewable energy, reducing carbon emissions, and re-forming the entire utility-customer interface, met last week at beautiful Marist college in Poughkeepsie for spirited and constructive discussion about how to enable, unfetter and facilitate free market, competitive solutions that will help to achieve the goals we share. We take our environmental responsibilities seriously at Rimon, (proud to be a ‘B” Corp with a zero carbon footprint !), so we were excited and proud to be asked to speak. Richard Kauffman, appropriately referred to as the State’s “Energy Czar,” and Diane Burman, Commissioner of the Public Service Commission, headlined the faculty, together with senior executives from the Hudson Renewable Energy Institute, Central Hudson Gas & Electric, National Grid, Blue Rock Energy, IBM, Dutchess County, the Advanced Energy Research Technology Center and the Smart Grid Consortium, and other leaders who have been deeply involved in the State’s renewables initiatives.

My brief presentation, for your comment and discussion in this Group, was largely derived from the presentations and panels we heard at the Infocast Projects & Money conference in New Orleans last January, which I had the honor to Chair. I essentially reported (and inevitably embellished) the careful notes I took in NOLA where over 300 project financiers, investors, developers, consultants and attorneys in the competitive power space, for the first time in the eight years of that event, spent 80% of our time together talking about the most dynamic 4% of the market – – renewable energy. Among the take-aways I shared with the Business Council last week were these: that the growth in renewable energy generation across the country is currently driven almost entirely by the RPS, except the part of the solar business that is driven by retail electric rates; that the roof would not fall in if Federal tax benefits to renewables were eliminated; that investors are eager to support that world with a lot more, less restrictive and less expensive liquidity than the tax equity market provides now, including merchant deal financing that tax equity will not currently permit;
that tax benefits contributing 55-70% of renewable project capital requirements are keeping the industry from finding its footing, and that without them, State incentives would be all the more compelling; that there is a crying need for vastly more transmission to support renewables growth, but that it may ultimately only be served by a change in law that would site and award transmission facilities exactly like we do pipelines at the Federal level, with no advantage to incumbents;that energy storage is a policy choice, and a very important one if the full capability of renewables is to be extracted usefully, but that with a few exceptions, it is unfortunately not a market; and finally that corporate America can do a great deal more to impact additionality in the renewable energy space, including (but not limited to) so-called Direct or Synthetic “PPAs,” but that so far, corporate America has found that to be very difficult, with only 160 MW of Synthetic PPAs reported signed in 2015 and another 190 MW signed in 2016 through June 1. I think I understand the reasons why this is so, having worked with corporate PPAs my entire career, and I think we have found and will find ways to overcome this inertia, not just for Google and Apple and Wal-Mart but for companies with less glorious balance sheets. The obstacles, however, are structural. Let me just say that it is probably not more difficult than selling the owners of paper mills on the idea of third party owned inside-the-fence CHP or hydro in the 1980s, (during a time when people of good will and environmental sensitivity thought that investing in long-lived clean coal was a good idea), but that the resolutions are, as always, going to have to make sense to corporate shareholders.

We congratulate the Business Council for its commitment to identifying and quantifying important elements and implications of this complex and comprehensive effort to make renewables work for all of us, and for its work in educating its constituents, our policy makers and the competitive markets. Each of them must be responsible for its commitment and accountable for its investment in that commitment, but all of them must understand each other in some depth, and must work together, if we are to realize New York’s renewable energy vision for the next generations. This was a good forum for understanding.

This article was first published on LinkedIn, and was reprinted here with permission.

For the latest information on what’s happening in the renewable energy landscape, read these next: