Columbus OH Thinks that Mass Transit Is Going Away - Infocast 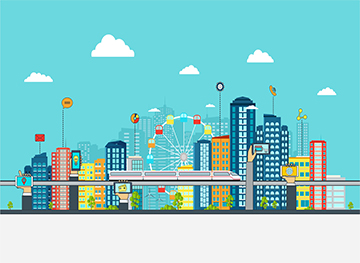 Columbus OH Thinks that Mass Transit Is Going Away

City planners in Columbus, OH had some thinking to do in June when their city won the U.S. Department of Transportation’s Smart City Challenge. The Challenge gave Columbus $40 million to invest in transit. Where would that grant money go?

In the past, Columbus had already decided not to invest in the kind of extensive light rail systems that other cities have chosen. But instead of using its grant to build light rail, city planners made the decision to prepare for the arrival of driverless cars. The plan was summarized in Columbus’s grant application, which stated, “The city of Columbus plans to leap-frog fixed rail.”

What Role Will Mass Transit Play in the Smart Cities of Tomorrow?

Some fundamental considerations come into play as cities consider the mass transit that they will improve or develop as their cities become smarter, including:

The United Nations recently issued a position paper on smart cities and infrastructure that you might want to download and read.  (Note that the downloadable version is a preliminary draft.)

Here is how the report envisions the future of transportation in future smart cities:

“Smart Mobility and Transport are best described to be approaches which reduce congestion and foster faster, greener and cheaper transportation options. A Smart City transport infrastructure aims to optimize those journeys that take place within a city, save energy and reduce carbon emissions. Most smart transportation management systems use data collected from a variety of sources about mobility patterns in order to help optimize traffic. . . Smart Mobility and Transport systems can be divided into the following areas: (1) Mass Transit (2) Individual Mobility and (3) Intelligent Transport Systems.”

Will Tomorrow’s Smart Cities Have Subways, Buses and Light Rail?

About the only certainty seems to be that a century from now, people will still need to move in and around urban centers. As cities grow smarter, the question to be answered is, how?

If you’d like to learn more about the future of smart cities, don’t miss our upcoming Microgrids Convergence Conference in San Mateo, CA on October 25-26. Now in its ninth year, this Summit will explore the intersection between microgrids, smart cities and advanced transportation.