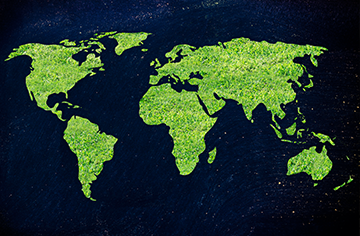 Just last week, the Energy Information Administration (EIA) released their annual International Energy Outlook, predicting energy consumption from renewable sources to rise by an average  of 2.6 percent every year, from now until the year 2040. On the flip side, nuclear power is also on track to see an increase in growth, with experts anticipating an increase of 2.3 percent in that same time frame.
But while renewable energy advocates can celebrate the strong growth of renewables, fossil fuels will continue to rule the global energy market for the foreseeable future. Yet, the anticipated use of fossil fuels in 2040 is still lower than what was predicted in the EIA’s 2012 version of the report.

“Even with this growth in renewables and nuclear, fossil fuels will continue to be the dominant provider of energy in 2040 in our reference case, supplying something like three quarters of the world’s energy use,” says Adam Sieminski. “That’s down from a number that was close to 84 percent in 2012. So fossil fuels are diminishing, but they’re still going to be pretty important.”

With renewables showing no signs of slowing down, more and more corporations will be under pressure to get in on the action, especially as we move into an era on track to see corporations grow and populations rise with India, Brazil and China developing further.

Moving forward, how will climate change rules and regulations come into play? Will new technologies alleviate some of the pressures caused by climate change, or simply create more problems? Regardless, we as a species need to intervene before climate change gets worse. It’s certainly heartening to see a greater embrace of renewables, but it almost feels pointless with our fossil fuel consumption growing simultaneously.

Infocast’s Corporate Renewables 2016 brings the corporate community together to take on the biggest challenge of our time- climate change. Corporate buyers will discuss the practical reality of energy procurement, renewable business strategies and more

A Game Changer in Renewables: How Corporations are Shaking Up “Business as Usual”